In a brilliant new series, acclaimed golf photographers select their favourite pictures from the Alfred Dunhill Links Championship and describe how these classic pictures came about.

First is David Cannon who has chosen this stunning photo which highlights the glorious contrast of colours that make the Old Course at St Andrews such a special place.

David recalls: “The walk up the 18th hole across ‘Grannie Clark’s Wynd’ is memorable enough for the golfers, but for the photographer it is one of my favourite spots on the Old Course as the late evening sunshine accentuates the shadows, humps and hollows and the players.

"I really like sitting up in the grandstand behind the 18th green just trying to make images like this where a combination of the shadows of the natural ground combine with the shadows made by the players." 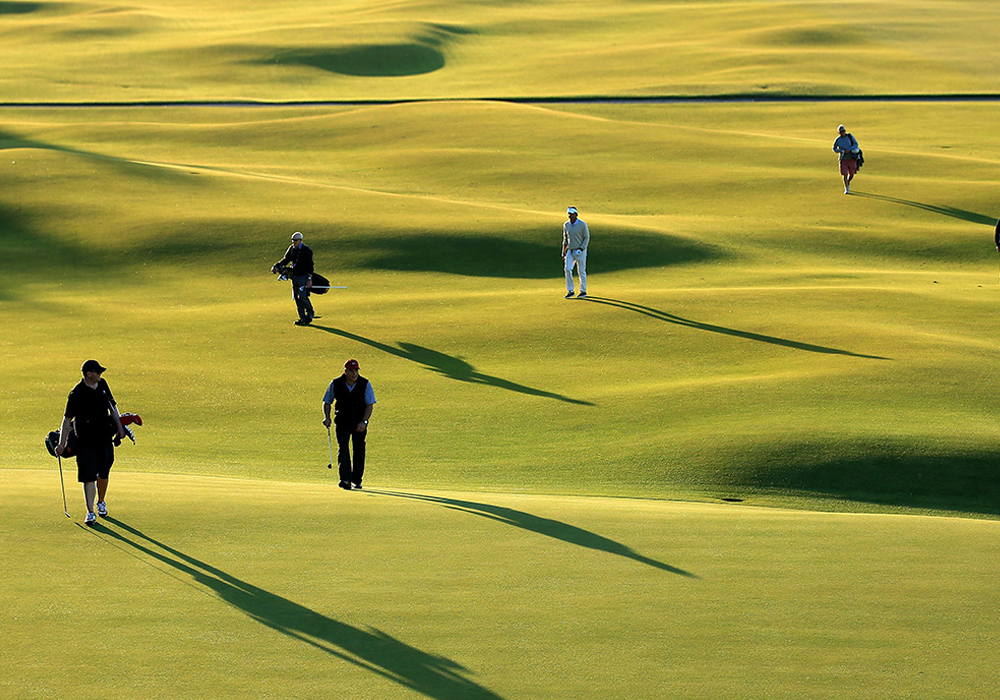 This week’s choice in this brilliant new series, in which leading golf photographers select their favourite pictures from the Alfred Dunhill Links Championship, is a classic. A remarkable example of being in the right place at the right time.

To most of us this seems a once-in-a-lifetime shot, but photographer David Cannon is humble enough to admit that luck played a large part.

David recalls: "It was the luck of the photographer! Pure luck is all I can say about this wonderful split second in the life of actor Matthew Goode as he played his tee shot on the 18th hole in 2010.

"The 18th on the Old Course at St Andrews is such an iconic view in golf. Each year I find myself being drawn constantly to this tee shot.

"The Swilken Bridge and the Royal and Ancient clubhouse make such a memorable picture and I know every player whether amateur or professional would love a picture like this.

"This one though is made even more special as the seagulls swoop by as Matthew is caught right at the top of his backswing." 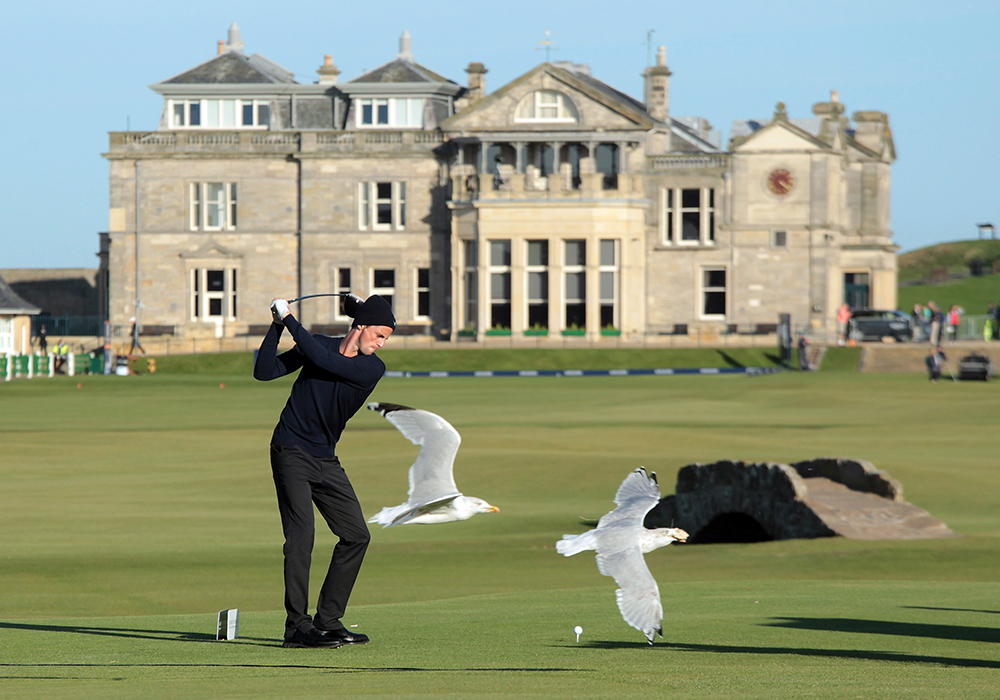 The most acclaimed photographers have been picking their own favourite pictures from the Alfred Dunhill Links Championship.

Uniquely the event includes famous amateur golfers as well as a world-class field of professionals. With such talent on display, the photographers are always looking for the exceptional shot.

David Cannon has picked a memorable shot he took of actor Jamie Dornan. He says: "This picture of Jamie is all about those split seconds making the difference between an ordinary picture and a great one.

"The celebrities try so hard when playing in the Alfred Dunhill Links Championship and this captures his determination as he chips over a hill at Kingsbarns in 2015.

"The exact position of the golf ball is something I can never control, but I always hope I can capture moments like this!" 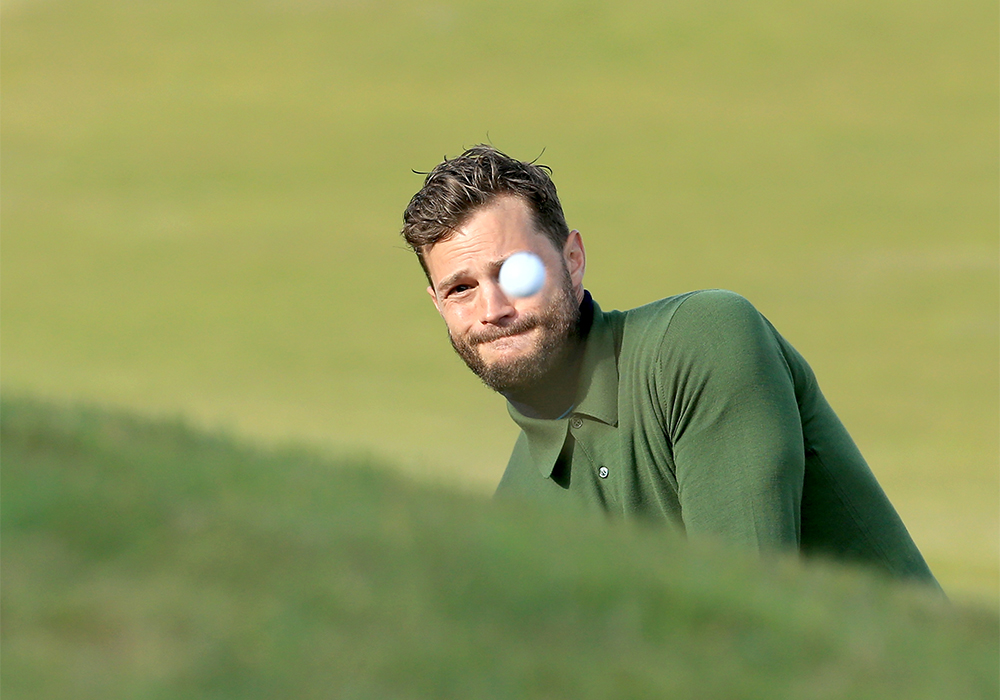 David explains how he created this special photograph:

"In 2019 I worked on a special project to try and capture images that combine the beauty of the courses and the appeal to the public of this wonderful event. That year was not a very sunny Alfred Dunhill Links Championship. The sun failed to shine very much on any day.

"Shooting scenic pictures really depends an awful lot on the skies, and this break in the cloudy skies at Carnoustie in the first round gave me a chance to use my pole camera which gave me an elevated perspective to capture the moment Rory McIlroy teed off on the fearsome par 3, 16th hole.

"I always tell friends that the Alfred Dunhill Links is a fantastic opportunity to watch these great players, celebrities and sporting icons on three of the world’s great golf courses where you can watch for free on the first three days.

"This picture captures the large gallery following Rory as they surround the tee, with a beautiful Scottish autumnal sky looking towards Carnoustie." 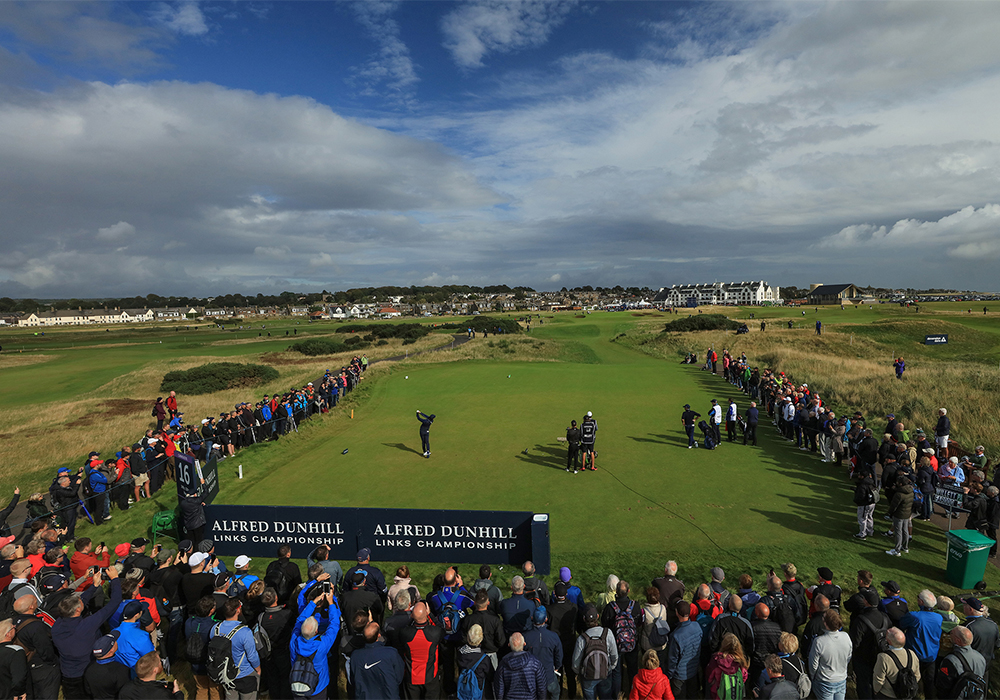 Photographer Ian McIlgorm has been documenting the Alfred Dunhill Links Championship since the very first year. Here he picks one of his favourite pictures from Kingsbarns, and it’s easy to see why.

Ian explains: "The 15th at Kingsbarns is a spectacular par 3, difficult at the best of times. Depending on tides, the required shot is a carry over water or an expanse of rocks. Only the brave and committed make it.

"Many visit the hazard. Not so many decide to climb down there. Even fewer find their ball amongst the seaweed, and only the truly intrepid try to play it from there.

"This gentleman made a valiant attempt during his practice round. Sadly the ball ricocheted around the stones once more and a glorious recovery was thwarted. But it made this photographer’s day." 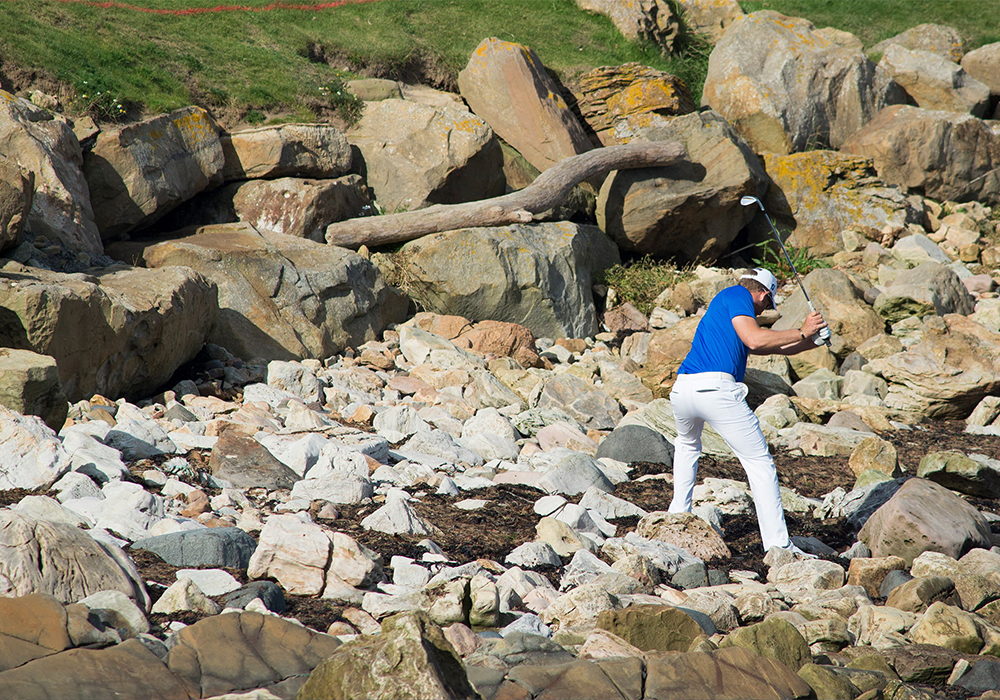 Our series of classic pictures by some of golf’s most acclaimed and imaginative photographers continues as they pick their own favourites from the Alfred Dunhill Links Championship.

Does this unique picture from Ian McIlgorm have a hint of ‘ET – the extra-terrestrial’ about it?

Ian says: "Professional Tommy Fleetwood and amateur partner Ogden Phipps always seem to have fun on course. Their signature greeting/celebration is a fingertip touch, rather than a fist bump.

"Watching Tommy practice swinging before starting his round on the 10th tee at Kingsbarns in 2018, I was aware of the strong shadow across the backing boards. Tommy, even in his hat, is so recognizable. When Ogden reached out, I caught the moment.

"Such a strong and positive pairing, they went on to win the Team Championship the following year." 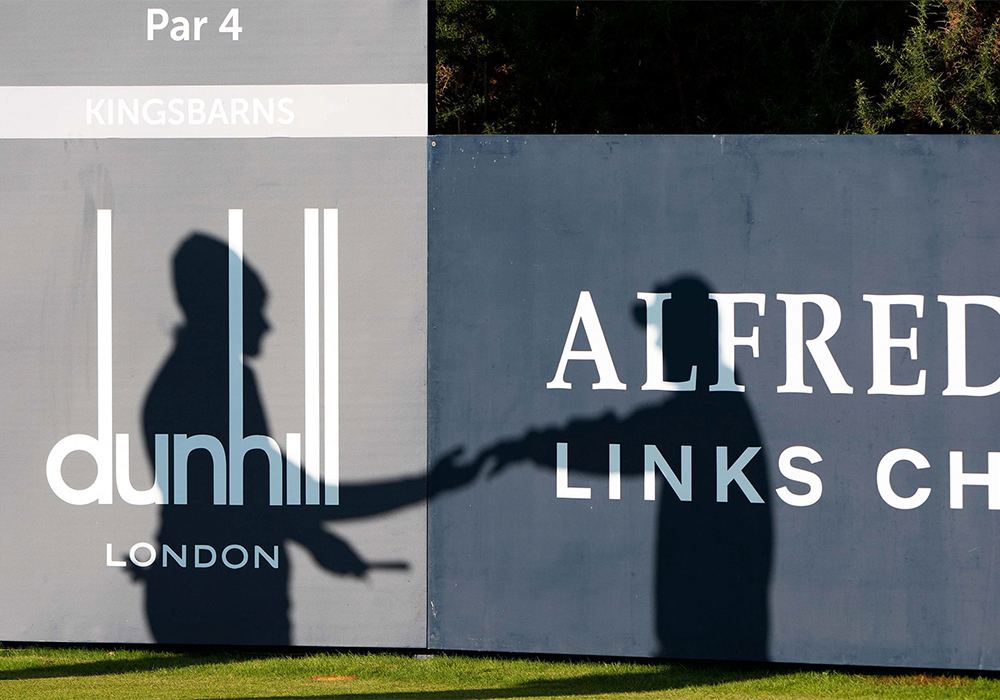 This week’s classic picture comes from leading golf photographer Ian McIlgorm. For him this was a magical moment which portrays the camaraderie, unique to the Alfred Dunhill Links Championship.

Ian recalls: "For me this is a tournament like no other, where lifelong friendships develop and fun rivalries are fought out, sometimes year-after-year."

"In 2017 actors Matthew Goode and Jamie Dornan played a practice round with Irish rugby legend Brian O’Driscoll on the Old Course in St Andrews. They are clearly completely relaxed in each other’s company, which makes for animated pictures that capture the essence of the event."

"The trio had been laughing all day, and at the end of 18 holes of good-natured ribbing, they posed for me on the Swilken Bridge. Even legends are drawn by this iconic scene, and are keen to have this moment on the St.Andrews landmark captured for posterity."

"A nudge here might send someone over the wall, often inviting a prank. Reactions can vary from momentary shock to hilarity. Happily O’Driscoll stayed dry." 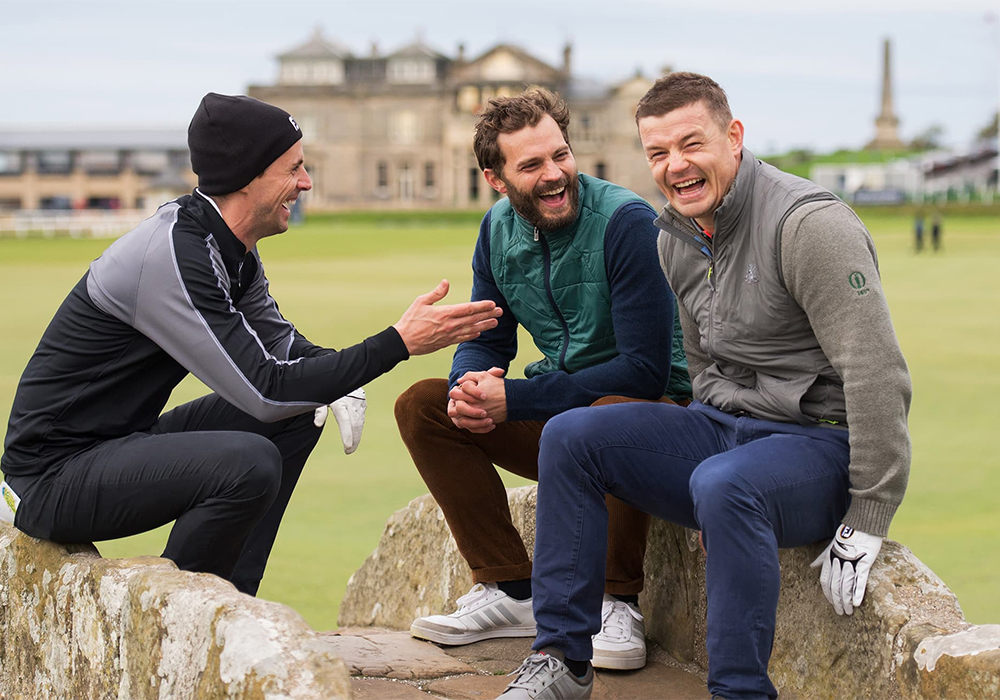 The #dunhilllinks Gallery... continues its classic sequence of pictures from acclaimed golf photographers. Here Matthew Harris, a regular at the Alfred Dunhill Links Championship, picks one of his favourites.

Matt explains: "I wanted to get a picture of Scotland’s current highest ranked player, Robert MacIntyre, at the Home of Golf."

"If possible I wanted to avoid the obvious tee shot from behind at the 18th with the R&A Clubhouse in the background."

"I chose the 14th as all the players try to hit a strong ball off this tee, as it’s one of the few still challenging holes left for the pros, especially into an easterly wind."

"It worked perfectly. Robert looks like he has this drive on a string." 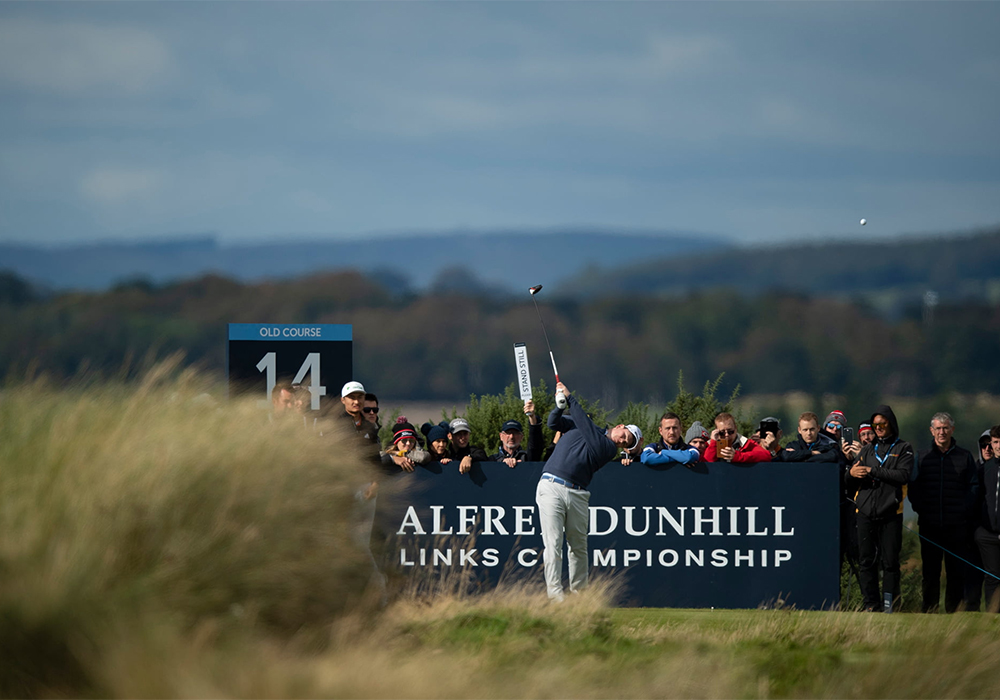 We continue our highly successful photo gallery of pictures from leading golf photographers who were asked to pick their favourite shots from the Alfred Dunhill Links Championship.

Here is Matthew’s story. "Even when returning to tournaments I’ve been to many times, I’m always trying to find a different angle that still retains the character and essence of that particular event."

"Having photographed many times the famous Par 4, 17th, Road Hole on the Old Course, St Andrews, I set myself the task of shooting it very tight. In this case, on a Nikkor 600mm f4 lens."

"In so doing, I captured Harry Hall splashing out of perhaps golf’s hardest greenside bunker." 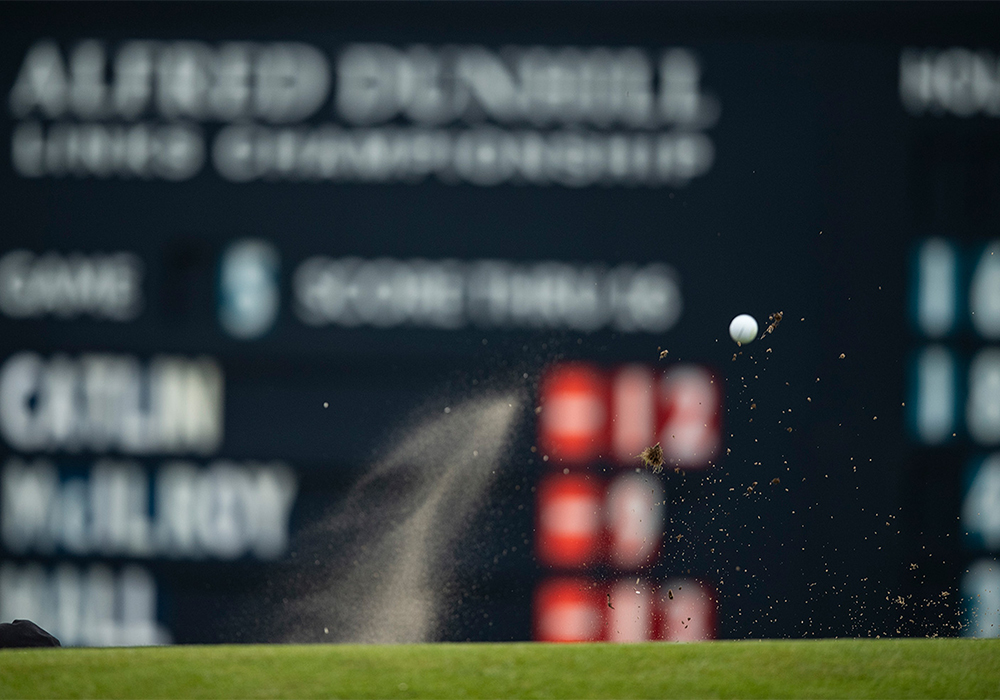 A classic Old Course picture of one of the giants of sport, at his most colourful, framed against the backdrop of one sport’s greatest arenas – the 18th hole at St Andrews.

This picture of Sir Ian Botham, one of England’s legendary cricketers, was chosen by top golf and sports photographer David Cannon for the Alfred Dunhill Links Gallery.

David says: "One of the brilliant appeals of the Alfred Dunhill Links is the plethora of world class sportsmen you can get to see playing the game I love.

"As a boy growing-up I adored cricket, and in my early 20s, when I was playing golf seriously Ian Botham was the world’s most exciting cricketer.

"He loves golf as a game and this picture shows what a good golfer he is, caught at the top of his swing on a glorious October afternoon on the most iconic tee in golf on the Old Course in St Andrews in 2014.

"He was a flamboyantly brilliant cricketer and his clothing certainly encapsulates his flamboyant character and the colours make this a very memorable image for me." 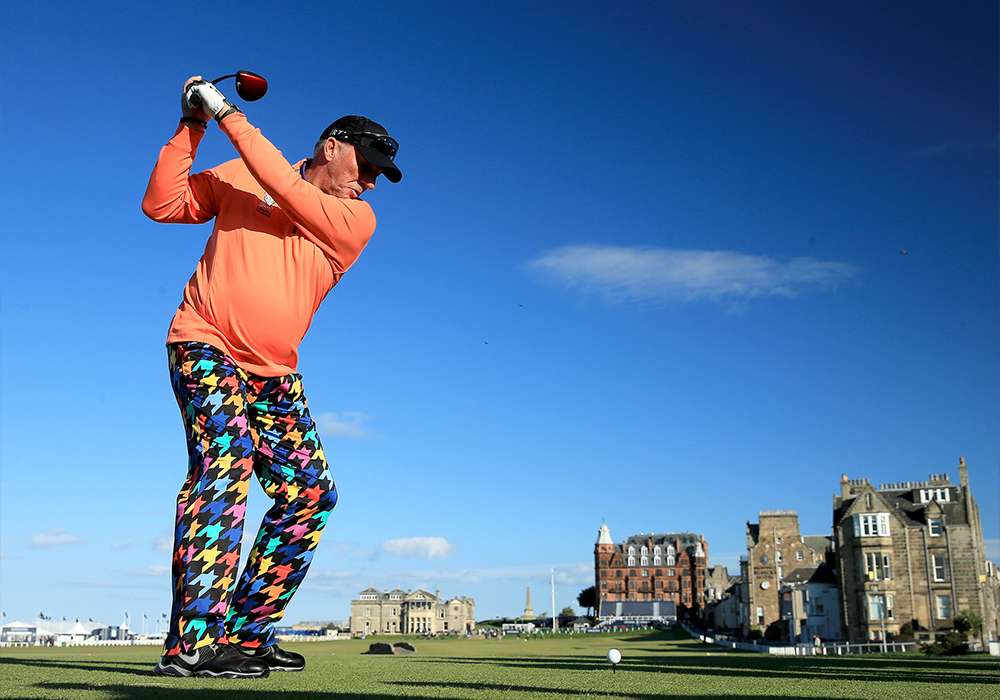