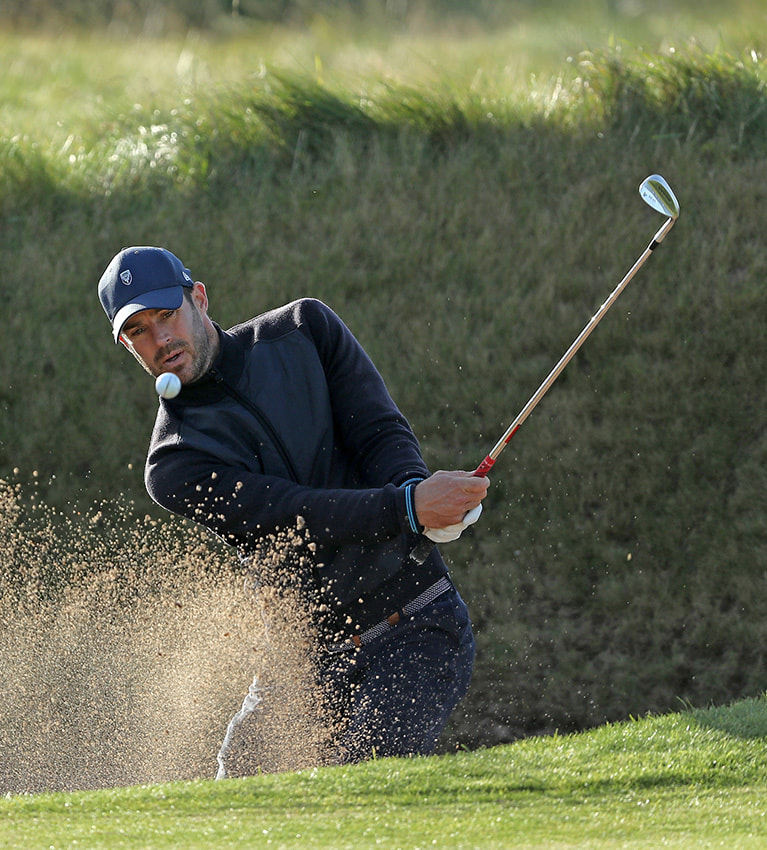 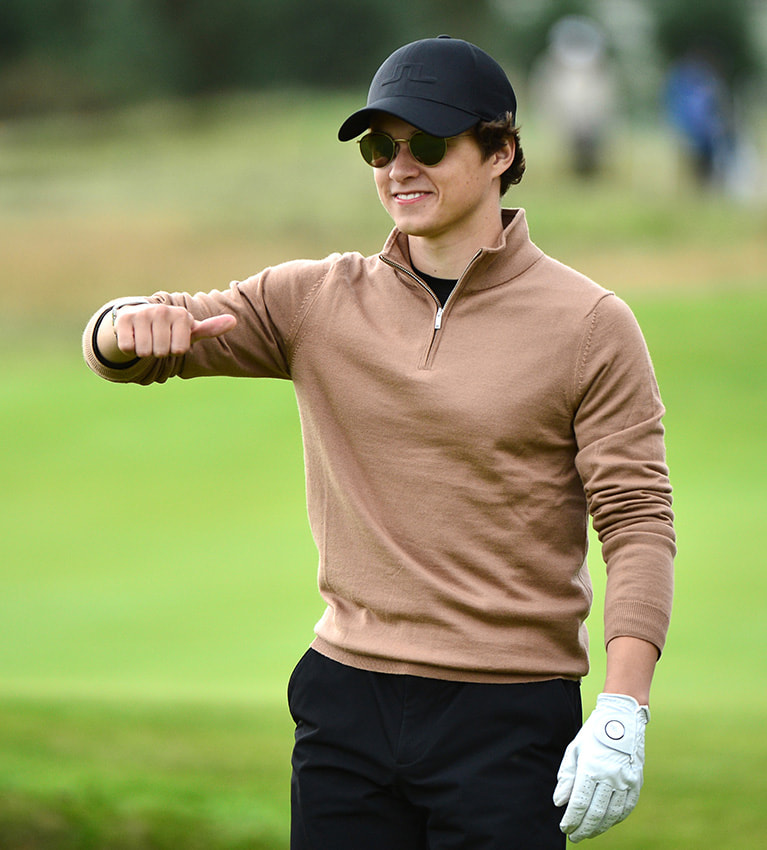 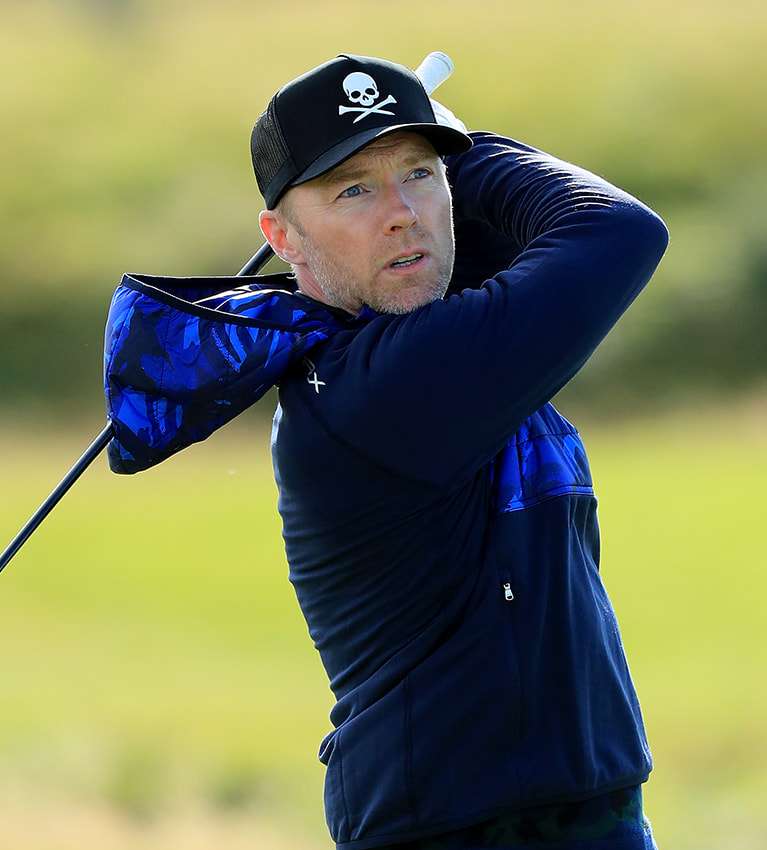 Lucky amateur golfers around the world are preparing to play in the 20th Anniversary Alfred Dunhill Links Championship at the end of the month. But only one, as far as we know, has recruited the help of his 12-year-old son to get him ready.

Jamie Redknapp, star footballer with Liverpool, Tottenham and England, decided some advice from son Beau, a promising young golfer, was what he needed.

As part of our series ‘Getting Links Ready’, Jamie and Beau let us share a warm-up round with them at the magnificent RAC Club in Epsom, Surrey.

Jamie, now a highly respected football analyst, said: “As soon as that invite comes through, the nerves start. You think about what it's like to play at Kingsbarns, Carnoustie, St Andrews with some of the best players in the world and make sure that you get your game in the right shape and not make a complete fool of yourself.

“It’s magical, and as soon as you go on that special walk on the Links it just feels like you're in a very special place that only a few are allowed to play at. Let alone in a big tournament.

“I've played at Wembley, I've done so many lovely things as a footballer that I'm so proud of, but playing in the Dunhill Links is right up there.”

Mentally, how does Jamie look at Getting Links Ready?

“If I was to analyse my game, it’s probably not ideally designed for Links. I've got quite a high ball flight, I drive the ball quite well, which is good, long irons are not too bad.

“But it's just the little shots around the green that I get a little bit nervy about, and occasionally get a bit of the yips with. Putting's OK, but the chipping and the pitch and runs, that's something I'm really working on this year.”

Over to Jamie’s No.1 supporter, and critic, for an honest assessment.

“So, Beau,” said Jamie. “What are my chances in the Dunhill?”

Watch out for another ‘Getting Links Ready’ video soon with another of the top amateurs playing in the Alfred Dunhill Links Championship.

‘Getting Links Ready’ with Brad Simpson of The Vamps

Amateur golfers around the world are warming up for the 20th Anniversary Alfred Dunhill Links Championship at the end of the month. But only one is having to fit his preparation into the middle of a rock tour of Britain.

However, Brad Simpson, lead singer of The Vamps, has a secret weapon: his Dad Derek, who was head professional at The Belfry for many years, and who we caught up with at Marriott Forest of Arden giving Brad a few tips.

Brad played in the Alfred Dunhill Links two years ago and thoroughly enjoyed the experience, but he wants to make sure he is even better prepared this time.

As part of our series ‘Getting Links Ready’, Brad and Derek let us eavesdrop on one of their sessions.

Brad said: “I played when I was young and I started playing again three years ago. A lot of the guys that I tour with all started playing together on the days off because it was a nice way to switch off and socialise with the people that you were touring with, in a way that's outside music and outside being in a hotel or a bus.

“I rediscovered my passion for golf a bit more because I was seeing how good it was for my mental state and how my game was improving the more that I was playing, so the past couple of years has been like falling back in love with it again.”

Derek said: “Before last time, he hadn't played a Links course really, so the shots he had to play were different to what he normally played. This year I'm trying to work on different ball flights for him. I've improved his swing a little bit, fingers crossed, and I’m trying to get him to score better.

“He hit some great shots but he just didn't score around the greens. You have to be able to play some low chipping runs on Links courses, so we’re going to work on that a bit before he goes on tour. He’s striking it much better than he was two years ago. He's definitely more prepared.”

The Alfred Dunhill Links incorporates two separate competitions - an individual Professional Championship for the world's leading golfers and the Team Championship, in which the pro’s are paired with amateurs, creating some unique camaraderie.

Brad recalls in 2019 he found the Championship enormously exhilarating, but challenging.

“It was the most intense amount of golf that I've ever played in one week, but it was fun. Having a goal, an event to look forward to and to practise towards, really helped. It was really enjoyable playing the three different courses, but it came with a whole different set of challenges. It’s made me even more passionate about golf.”

Dad Derek added: “He met some fantastic golfers out there and Brad realised how good they actually are. He could stand in front of 50,000 people and sing, but going on a golf course in a big event like this was quite nerve racking for him.”

While The Vamps are performing all over the country over the next few weeks, Brad has his golf clubs in the tour bus and will be taking every opportunity to play. But he has one fear.

“Now I’ve done this video, I’ve given the game away that my Dad’s a pro. Everyone at St Andrews is going to be saying ‘you should be better than you are’.”

‘Getting Links Ready’ with Ronan Keating

The clock is ticking down to the start of the 20th Anniversary Alfred Dunhill Links Championship, and golfers around the world are preparing for their big moment when they return to the Home of Golf at the end of the month to take part in one of the most prestigious events of the year.

Music star Ronan Keating is one of the amateur players who will be joining the pro’s, playing over the world-famous Old Course at St Andrews, Carnoustie and Kingsbarns in a celebration of Links golf at its finest.

As part of our new series ‘Getting Links Ready’, Ronan allowed us to share the moment with him as he warmed-up at the Centurion Golf Club near Hemel Hempstead.

He said: “The Centurion or The Grove are the two courses closest to my home, so I practise there as much as I can, on the practice facility probably more than the golf course, because I'm working most days.

“I'm on Magic in the morning. I'm doing The One Show in the evening. I've got a new record I'm working on, so I've been in the studio. So, it's twilight on the driving range, just hitting a few balls, trying to get some sort of consistency. I'm not getting a whole lot of course-golf at the moment.”

The Alfred Dunhill Links incorporates two separate competitions - an individual professional tournament for the world's leading golfers and the Team Championship, in which the pro’s are paired with amateurs, creating some unique camaraderie, and the occasional hilarious moment.

Ronan recalls: “Lee Westwood and I played together. He's a very, very good friend of mine. And he knows how much I love the game. But when you're on 17 and you hit the hotel and your pro falls to the floor laughing and 500 people around you on the tee box all start laughing - it's tough, it's hard!”

In 2008 when he was playing with Graeme Storm, Ronan led the Team Championship at the end of the second round and said it was one of his best moments in golf to see his name blazoned at the top of the scoreboard.

“As an amateur, you just want to get out and get swinging the club as much as you can and feeling like you have some sort of a game in your Links-ready preparation.

“What am I focusing on? Really, for me, it's about feeling consistency, feeling confident in the swing. You know, nine times out of 10 as an amateur, you stand over the ball and you're telling yourself all the things.